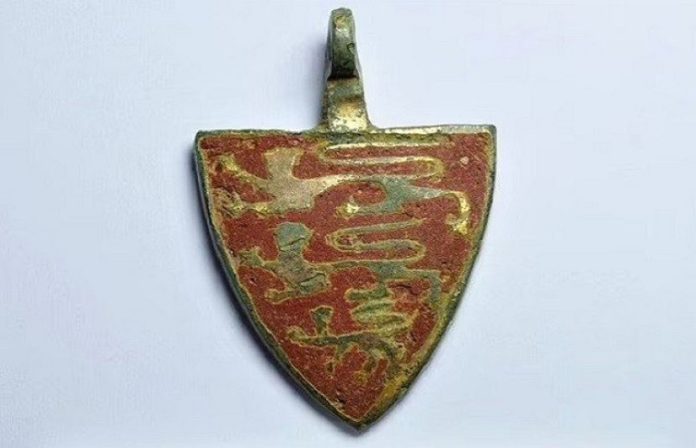 Archaeologists working on the HS2 high-speed rail project in Britain have discovered an 800-year-old pendant with three gold lions carved on it.

Dating back to the 12th century AD, this priceless treasure was discovered in Wormleton, a village in Warwickshire, south-east of Birmingham. This pendant has three golden lions on a red background. This design is exactly the same as the English football team’s shirt.

The pendant was a little more than two centimeters wide and four centimeters long, and had a hinge at the top with which it was fastened. Experts believe that the locket was probably new at the time it was lost.

The use of lions as an emblem of England dates back to the reign of William the Conqueror, the first Norman king who ruled from 1066 AD to 1087 AD.

King William the Conqueror used two lions on a red background as the emblem of the English throne. A third lion was added to this emblem by Henry II, who was the king of England from 1154 to 1189.

According to HS2, the place where this locket was found would be inhabited by Iron Age or Roman and British settlements.

What does a Cold War-era radar system buyer want?

A new world record of breaking 148 coconuts in one minute