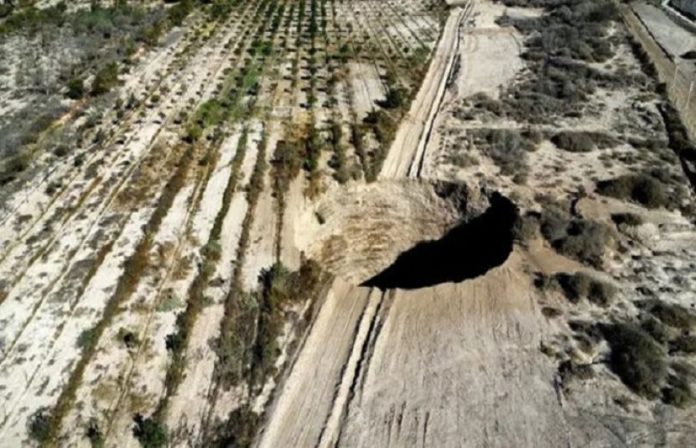 Experts were surprised when a sinkhole 25 meters wide and 200 meters deep appeared in a very short time near a copper mine in Chile.

A Canadian company Levondon Mining worked to extract ore from a copper mine 665 km from the capital San Diego, after which a pit has been seen in a barren area some distance from here. According to the National Institute of Geology and Mining, the crater was discovered on Saturday. After that the experts came here. David Montenegro, head of the institute, said that the total depth of the crater is 656 feet.

The crater occurred in the town of Tierra Amarilla, where the surrounding area has been closed off to the public and aerial photographs of the crater have been widely reported in the media.

However, the mining company said in its statement that no miner has been harmed during this time. On the other hand, this crater is also stable with no further signs of disintegration. He said that after receiving the information, the area was immediately cordoned off and the concerned agency was informed.

After that, the relevant agencies have started their investigation.

Previous articleNo one will be allowed to protest in front of Election Commission, Interior Minister
Next articleBabar Azam’s rule in ODI and T20 rankings remains intact
RELATED ARTICLES
Entertainment News