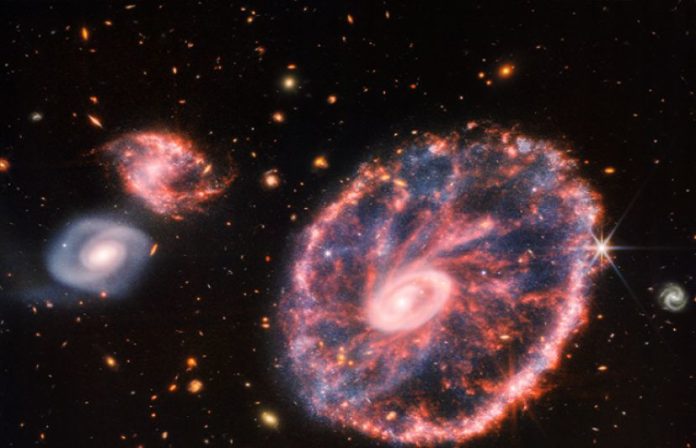 NASA’s James Webb Space Telescope captured a beautiful image of the ‘Cartwell’ galaxy, revealing new details about the star formation process and the black hole at the center of the galaxy.

The telescope’s powerful infrared camera captured a detailed image of Cartwright and its two smaller galaxies, with several other galaxies in the background. This image provides a new look at the Cartwright Galaxy and how it has changed over the course of billions of years.

This is a rare view of the Cartwright galaxy in the Sculptor cluster, 50 million light-years from Earth. Its shape, which resembles a chariot wheel, is due to the extreme events that take place in it. Collisions between galaxies in space regions result in many different and smaller phenomena. The same happens with cartwheels.

Astronomers call it the ‘Ring Galaxy’ because of these distinctive features. This structure of galaxies is less common than ‘spiral galaxies’ like our Milky Way.

Previous articleThere are many mistakes in the Election Commission’s decision: Fawad Chaudhary
Next articleDecline in crude oil prices in the global market
RELATED ARTICLES
Technology