How can an apple keep a doctor away every day? 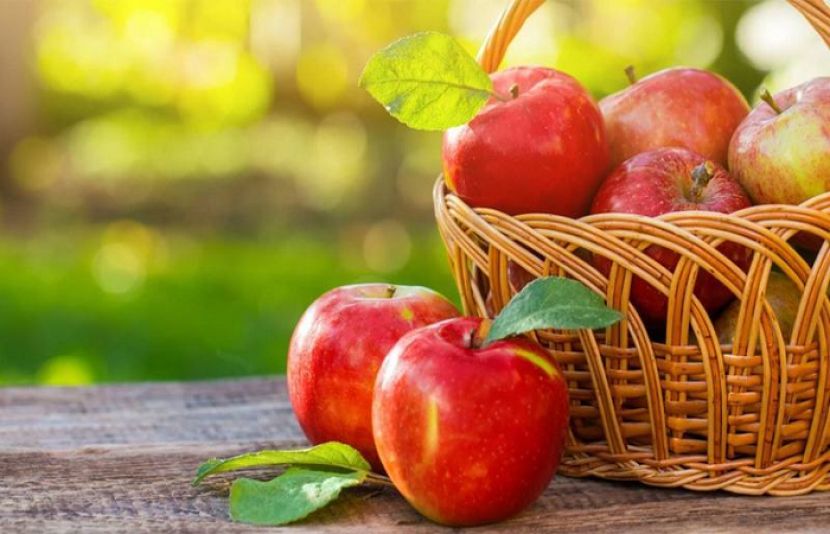 But do you know how an apple can keep a doctor away every day?

In fact, it is a magical fruit that is rich in antioxidants, vitamins, fiber and other nutrients, with more than 7,500 varieties available worldwide.

This fruit is not only beneficial for health but also fulfills the desire for sweetness while also helping to fill the stomach. Learn how eating just one apple a day can benefit you.

In addition, copper, manganese, vitamins A, E, B1, B2 and B6 are also formed in the body.

Apples are an excellent source of polyphenols, compounds with many health benefits.

Eating apples with peels is more beneficial because 50% of the fiber and most of the polyphenols are present in the peels.

Apples are a fruit rich in fiber and water and both of them make the stomach feel full for a long time. One study found that people who ate apple slices before eating had a longer feeling full than others.

The same study found that people who ate apples at the beginning of the meal produced an average of 200 fewer calories than others.

Another 10-week study of 50 overweight pregnant women found that women who ate apples regularly lost an average of one kilogram more weight than others.

In addition, some of the natural compounds in apples are potentially helpful in weight loss.

The relationship between eating apples and reducing the risk of heart disease such as heart attack and stroke has been discovered. One reason for this is the presence of soluble fiber in apples, which helps lower blood cholesterol levels.

Similarly, polyphenols are compounds with antioxidant effects, especially polyphenols called flavonoids can lower blood pressure levels. An analysis of research reports found that high intake of flavonoids in the diet could reduce the risk of stroke by up to 20%.

Another study found that eating an apple a day has the same effect as medications that are taken to lower cholesterol levels, meaning that the fruit can be as effective in reducing the risk of death from heart disease as the medication. Is.

Numerous research reports have suggested that enjoying an apple may reduce the risk of type 2 diabetes.

A large study found that eating one apple a day reduced the risk of type 2 diabetes by 28%, and even eating a few apples a week could have the same benefits.

It is possible that the polyphenols in apples can protect the tissues of the beta cells in the pancreas from being damaged, these beta cells make insulin for the body and these cells have been damaged in people with type 2 diabetes.

Apples contain a type of fiber paste that acts like a probiotic, a food for bacteria in the stomach. The small intestine does not digest this fiber and this fiber reaches the colon, where it accelerates the growth of beneficial bacteria.

According to research reports, this is probably the reason why the use of apples helps to prevent obesity, type 2 diabetes and heart disease.

Test tube research reports have shown a link between the plant compounds in apples and the reduced risk of cancer. Similarly, a study of women found that eating apples reduced the risk of dying from cancer.

Scientists believe that the antioxidant and anti-inflammatory effects of this fruit play a potential role in protecting against cancer. Apples rich in antioxidants can help protect the lungs from oxidative stress.

A study of more than 68,000 women found that women who ate more apples had a lower risk of asthma.

Eating a large apple a day can reduce the risk of this disease by up to 10%.

The flavonoids in apple peels help regulate the immune system and reduce inflammation, both of which can help prevent asthma and allergic reactions.

Some research reports have shown that eating apples has a positive effect on bone health. One study found that women who ate apples had lower levels of calcium than others.

Apple juice can help prevent mental decline as you age.

An animal study found that apple juice reduces the rate of harmful reactive oxygen spaces that accumulate in brain tissue and reduces the risk of brain degeneration.

Apple juice also protects the brain transmitter acetylcholine, which declines with age, a deficiency that also increases the risk of Alzheimer’s disease.

Similarly, researchers in a study on rats found that the animals that were fed rats, their memory became like the age of adolescence.

That is, the fruit also contains the same compounds as apple juice, and it is better to eat the fruit than the juice, because it also gives the body other benefits, which have been mentioned above.