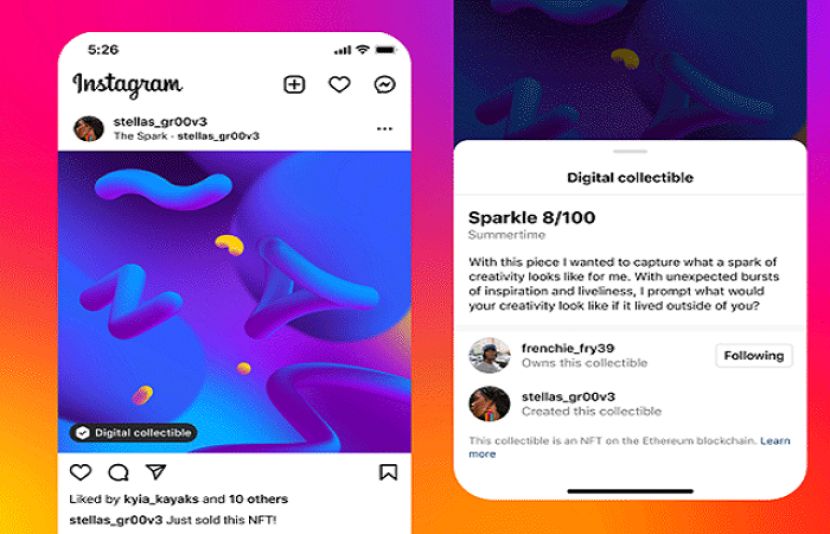 Although the NFT scenario is not much better with Bitcoin, Instagram has said that it has created a display space for non-flammable tokens (NFT) on its app. It is being tested, but only certain US users have access to it.

It was officially announced by Adam Musei, the head of Instagram, in which he showed it in the app of selected creators. Later it will facilitate polygon with cryptocurrency etherium and then its scope will be extended to web 3 protocol flow and solana currency.

NFT owners will then be able to access Rainbow, Trust Wallet and Metamask accounts to verify ownership.

The NFD can be added to the main Instagram feed. That is, they will also appear in stories and direct messages. The tick sign in a hexagon will also be able to verify the user-generated NFT. Although Instagram has been working on it for a long time. But now not only has the NFT show been launched, but the app will also help in buying and selling them. It will even show you the way to the market.

Earlier, Mark Zuckerberg, owner of Facebook, Instagram and WhatsApp under Meta Company, has also expressed special interest in NFT. They want to play a key role in the NFT Metavers for which, for the first time, a hardware store with head-up displays and on-screen glasses has been opened.

But it should be noted that there has been a dramatic decline in NFT sales. According to the Wall Street Journal, NFT sales have fallen by 92% since last September.