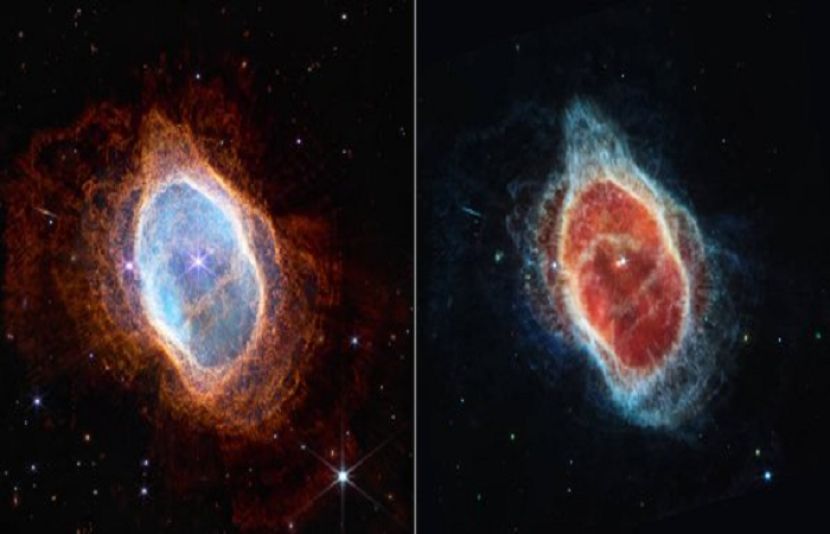 The James Webb Space Telescope, worth billions of dollars and the efforts of thousands of scientists over 20 years, has released more mesmerizing images of the near and far universe.

One image shows a planet beyond the solar system in which water vapor has been discovered. In the second image, a dying star can be seen in the form of a nebula. In the third picture, beautiful galaxies are merging with each other, and in the fourth picture, the birth of new stars and the raw material of these stars can be seen below.

Details of these important images have been released by NASA in the form of a star party in a live broadcast. The processing of these images was discovered and the details worked out by the experts working on it. It may be recalled that at 3 am Pakistani time yesterday, US President Joe Biden released the first picture released by James Webb of a very old galaxy SMAC 0723. This galaxy was formed just a billion years after the creation of the universe. By looking at it, we can know the evolution of galaxies in the universe.

Today, however, NASA has released four more images, the first of which directly depicts a planet.

The first image from a telescope is the first image of an exoplanet beyond the solar system. It is a hot gas planet that cannot be photographed directly, but in its atmosphere water is present in the form of vapor or steam instead of liquid.

The second image shows the last hiccup of the star in the form of a nebula. This is a beautiful planetary nebula. Its substance is visible in the form of waves. The orange color is due to hydrogen. The blue light in the middle shows the hot ionized gas. In the center of this nebula’s image are two very close stars.

The third image is Stephens Quintet, a collection of four galaxies. It can contain tens of millions to billions of stars. These galaxies are 300 million light years away from us. The lower galaxy on the right is merging with the upper galaxy.

The galaxies appear to be fused together, which is why it is so important. It can also explain the evolutionary process of the galaxy. It combines near (near) and mid (middle) infrared images. Many stars are forming in the background and gas and dust are also visible.

In the same image, when the nearby infrared spectrum was removed, more details emerged, including an active black hole. It is as if the black hole is drawing bright gas around it. This process has caused the hot gas flames to burn even more, and their light is 40 billion times that of our sun, which can be seen in the form of extraordinary light in the upper galaxy.

The Near Infrared Spectrograph, developed by its special spectrumist, the European Space Agency, in partnership with NASA. Spectrography shows the chemical composition of a space body and what elements it contains.

It can be called the most important and beautiful picture of James Webb.

This is the nursery of stars where new stars are being born. This is a very beautiful and enchanting picture. This place is located at a distance of 7600 light years from our planet. The human eye has never seen such a scene in which hundreds of new stars are emerging.

This image shows the bubble-like structure, spaces and other features that have emerged with the emergence of the new star. However, more galaxies can be seen in the background. However, there are some structures that need to be considered as to how they came into being.

In the upper blue part of the picture can be seen the huge stars that have just been born. Below this, the brown and orange structures are formed by the radiation of the same stars, and these are large structures consisting of gas and dust. We know that stars are made up of gas and dust. At one point the substance accumulates and ignites under gravity and pressure.

Previous articleAn appeal has been filed against the acquittal of Imran Khan and others
Next articleThe Corona epidemic is not coming to an end, we must be careful immediately: WHO
RELATED ARTICLES
Technology